"The Merels Board Enigma. With the worldwide census" (Marisa Uberti -Translate by Gianluca Toro)

(from my last omonimous essay [1])

The literature leads us to put in evidence two important schools of thought: the one that considers the Merels Board a game and the one that considers it a symbol. Now, after many years of research, we think that one cannot investigate without considering both the aspects, that cross and complement each other. In antiquity and also afterwards in the learned élites, the ability and strategy games weren’t ever played with levity. "Each game represents a problem of knowledge for which we have to find a suitable solution", Josè Luis Echeveste writes in the "Las claves ocultas de los juegos" (The hidden keys of the games). We’ll better consider it in the course of this essay.

In Italy, the research meant to investigate the Merels Board is in full development, especially with regard to the symbolic aspect, representing one of its values. But it’s very probable that he who was on the point to put the term "Triplice Cinta" (as the Italians call the Merels Board of type a) in the modern virtual search in the web, invariably runs into the few websites (among which there is ours) dealing with it. Nevertheless, it’s enough to move in the ludible field to warrant better results. Making a virtue of necessity, one has therefore to enclose a certain dose of cunning, keeping in mind that our subject is known more as a gaming table [2] than as a potentially sacred symbol. Thus, one has to set up the searching with the criteria taught by the experience. In fact, different names have been popularly attributed in Italy to the Merels Board (type a): filetto, mulino, mulinello, smerelli, trija, grissia or marredda (this latter in Sicily). And who knows with how many other epithets it is known at a regional level or in even more little human aggregations. Then, in foreign countries the name is notably different, passing from French merelle to English Nine men’s morris and to the German Műhlerbrett, while in Spain Merels Board is locally called alquerque de nueve ("square of nine") and the Italian "tris" and "alquerque" are called respectively alquerque de tres ("square of three", see type b) and alquerque de doce ("square of twelve", see type c), on the ground of the number of pieces employed in the game and the adopted rules. It’s to be noticed that to put three pieces in line, aim of the little merels game or tres-en-raya for the Spanish, foresees for these latter to say in a loud voice the Trinity names. Clearly there have to be a hidden reason for this (see chapter 3 paragraph 7).

Even if it seems a negligible fact, the etymology is of basic importance, because if one searches for a word instead of another, one runs the risk of finding absolutely anything and thinking that no one attends to the Merels Board, while things are different at all. In order to find the higher possible number of data, it’s therefore very useful to know the denominations given locally to the Italian "filetto", because unexpected worlds will be opened by searching with the right word. The only care is to translate the respective works written in English, Spanish, French or German, but with a good dose of will and good dictionaries it will certainly not be a big obstacle to "knowledge". 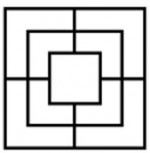 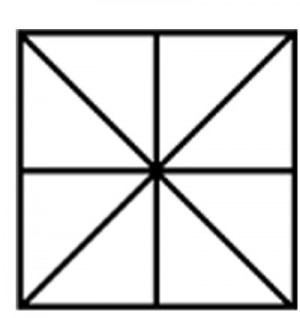 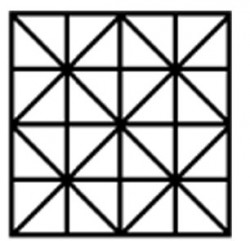 From 2008, one of the most important novelties has been the design of a further instrument for data collection (besides the bibliographic and field research), in the form of a blank to be filled in, through which a feed-back between the undersigned and my website readers has been set up. Here follows the blank fac-simile.

The blank can be downloaded from this website  and can be accompanied by other iconographic material. In different cases, the signaller has showed a remarkable competence, inserting data not even foreseen in the blank and/or personal impressions evoked by the finding place, historic news, etc., showing an enthusiastic involving in the present study. 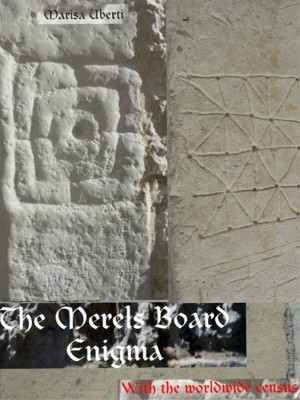 This essay is made up by two parts and two Appendices. More than half is represented by the world-wide census, an integral cataloguing work that represents an absolute novelty since, until today, there were only partial inventories. Moreover, for the first time a statistical analysis with graphs is presented, allowing to set the starting point for the study on the subject, from which to continue for future updatings.

The References have been put at the end of each table, so to make easy their consultation. These "notes" report all the reference sources for a given exemplar, being they literary, from the web, investigations on the spot or discoveries of third party persons, these latter singularly receiving our thanks. The final bibliography/webgraphy refers to some useful work to undertake the study of the Merels Board.

In the text were intercalated some boxes to point out some concepts or deepen other. They are distinguished by a different colour for each chapter.

[2]The goal is to put three pieces in a row (vertical, horizontal or diagonal). The players are two, each with nine pieces of a colour different from that of the opponent. The game starts putting the pieces outside the game board. In turn, the challengers put the first piece anywhere on the game board, where the lines joining the three concentric squares cross or at the vertex. They go on in this way, considering that they will mind both blocking the attempts of the opponent in putting three pieces in a row and putting them by himself always in a row, thus arranging a tris. If the player will succeed in putting three contiguous pieces in any direction allowed by the scheme, he will be able to catch ("eat") a piece of the opponent. This latter will not be able to place again such piece on the game board anymore. The tris so obtained can no longer be effaced. The pieces can be moved according to precise rules, on an intersection or on a free adjacent vertex. When a player remains with only three pieces, he is allowed to move the piece in any position, also not adjacent to the starting position. The winner will be the player who will be able in leaving the opponent with less than three pieces that can be moved.

Argomento: The Merels Board Enigma

<a href=https://www.greenhillthelodge.com>timberland winter boots for men</a> <a href=https://www.greenhillthelodge.com>timberland work boots on sale</a> Luckily, he didn't start copying the whole stabbing someone in a sauna thing. Manuella was apparently pretty good at his job, making as much as 1,500 for showing up in character as the Oscar-winner at various corporate events, weddings, and birthday parties. Apparently nothing quite says, "Happy Bat Mitzvah, Rachel," like an appearance from the Taxi Driver. To give an example of how good he is, here's a video of him performing on stage, lip-synching to . . . a Joe Pesci song. Aw hell, same thing, right?Joe Manuella via YouTube <a href=https://cheapauthenticjordan.canerarslanalp.com/>Air Jordan 3</a> It's an idea so heartwarming that the blueprints were actually drafted by puppies and kittens. The church members avoided a possible local backlash, respected the sanctity of the old tree, and at the same time created an environmentally friendly building that warms naturally in the winter without any costly heating. What's not to love?The Backfire:Here's what the building looks like from the sky, via Google Earth:Google Earth <a href=https://www.associazioneitalianadanzecaraibiche.it>Christian Louboutin Shoes Outlet</a> <a href=https://www.foodandsolutions.it>Moncler Coats</a> Just like nature intended. The Backfire:Nobody was monitoring the trucks that were spewing tons of concrete onto the ridge, so nobody noticed that the concrete was flowing right back out again and pouring into the creek below, turning it into a long concrete sidewalk. It was 3 feet deep in some places. Darren Pateman <a href=https://cheapjordannikeshoes.canerarslanalp.com/>Retro Jordans 4 For Sale</a> 6. The Joker's Mask in The Dark Knight Was Based on the Old Batman TV ShowWarner Bros. With The Dark Knight, Christopher Nolan wasted no time in establishing that his interpretation of the Joker would be like nothing we'd ever seen before. In just the first five minutes of the movie, Heath Ledger's character not only pulls off a daring daylight robbery of a mob bank, but simultaneously arranges the deaths of all of his accomplices, and he does it all while wearing a mask from Tim Burton's reimagining of Snow White. Warner Bros. This quickly let us know that the character was a scheming, machine-gun-toting mastermind, which completely set him apart from all the other Jokers that we knew, especially Cesar Romero in the silly '60s Batman TV show. That is, other than the fact that Ledger wore Romero-Joker's mask throughout the entire bank robbery. 20th Century Fox TelevisionAll evidence seems to point to the design of Ledger's clown mask being modeled directly on a scene from "The Joker Is Wild," an episode of the Batman TV series that also marked the first appearance of the Joker on the show. In the episode, Adam West's Batman tracks Romero's clown prince of crime to the Gotham opera company, where he's secretly performing an aria from Pagliacci, because back then that was as close as the Joker could get to being an actual killer clown . As you can see, the similarities between Romero's Pagliacci costume and Ledger's mask are undeniable. 20th Century Fox Television, Warner Bros. <a href=https://mbtzapatoses.canerarslanalp.com/>MBT Zapatos Outlet</a> "Squirtle, I choose you!" <a href=https://wholesalejordanshoes.canerarslanalp.com/>Jordan Shoes 3</a> jack a jet pack. Anything but the road. Why? Because the poor bastards who drive the Posankka road away from Turku are waved goodbye by this:Via Turkulainen. fi <a href=https://mbtzapatosbaratos.canerarslanalp.com/>MBT Baratos</a>